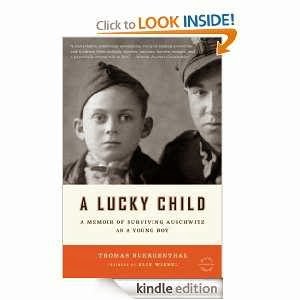 Publication Date: April 7, 2009
Thomas Buergenthal, now a Judge in the International Court of Justice in , tells his astonishing experiences as a young boy in his memoir A LUCKY CHILD. He arrived at  at age 10 after surviving two ghettos and a labor camp. Separated first from his mother and then his father, Buergenthal managed by his wits and some remarkable strokes of luck to survive on his own. Almost two years after his liberation, Buergenthal was miraculously reunited with his mother and in 1951 arrived in the  to start a new life.

Now dedicated to helping those subjected to tyranny throughout the world, Buergenthal writes his story with a simple clarity that highlights the stark details of unimaginable hardship. A LUCKY CHILD is a book that demands to be read by all.

Review: What a moving story. Thomas Buergenthal relieves a past and shares it with us....from being a boy under Hitler, working at Auschwitz, the liberation of Soviet Soldiers, imigrating and so much more.

At eight years old he was tossed into this life. He survived for several years and was reunited with his mother when he was twelve.

I have to say, after reading this book, I truly admire the author. It's such a terrible thing to go through, but in his memoir he shows and teaches forgiveness for a time that was all but kind to him.

After this childhood ordeal, he's committed his adult life to international and human rights laws. This is a sad yet inspiring read that I highly recommend.

It made me think back to a wonderful woman named Tobie that I worked with just out of high school. She had a concentration camp stamp on her arm. Another person stronger than most any of us will ever be. I do hope she's well or resting in peace somewhere.

This book is a must read for everyone.