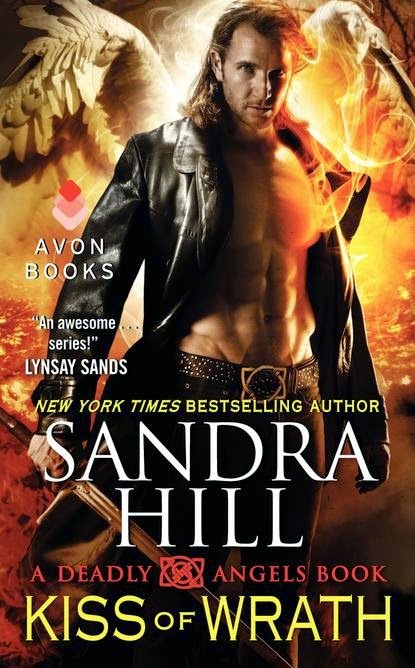 The vangels are back in Kiss of Wrath, the latest in Sandra Hill’s bestselling Dark Angels series

No wicked wenches or wild rampages…it’s been centuries since Mordr the Berserker was turned into a Vangel-a Viking Vampire Angel-as punishment for his sin of wrath, and he’s been frustrated ever since. It’s not so bad being stuck in modern-day Las Vegas. What better place to slay Lucipires, or demon vampires, than the original Sin City. But then Mordr Sigurdsson’s mission is expanded to a new assignment: protect lust-worthy Miranda Hart.

Miranda’s well-ordered life turned into chaos when she unexpectedly inherited her late cousin’s five children. Now, her cousin’s dangerous husband is about to be paroled, and she needs a miracle to keep them all safe.That miracle arrives on her doorstep in the form of a very buff, handsome man with a very strange name. Mordr wants nothing to do with a red-haired wench or children. Miranda wants nothing to do with gorgeous hunk who claims to be a Viking.

As Miranda and Mordr give in to temptation, they must decide if they fit in each other’s worlds-before their enemies close in on them.

This book was not what I expected and I sort of ended up having a love/hate relationship with it. I am familiar with the "Don't judge a book by it's cover" motto - yet, still- I often do. So, truth be told, I wanted to review this book based on the cover alone. (Dodges tomatoes being thrown at me.)
That being said, the first 25% of the book, I thought I'd never get through. It moved so slow and was just, I don't know - I almost stopped reading it. I'm glad I didn't though.

Vangles are an interesting concept...as are their enemies. So, while these Vikings were turned into Vampires, it's very far from your typical vampire story.

The adoption of five kids was one area I had a love/hate feeling for. I wasn't sure how the author was going to pull the story off. It hit close to home, though, as I've taken in a relatives three children recently and can attest to the chaos and changes it brings on the singe life. So, this concept truly worried me, but in the end - it absolutely worked.

The other issue was Mr. Big Bad Viking cooking and plying nanny to kids. I see how it worked. And it wasn't the real reason he was there, but even now...it still bothers me.

Throw in some issues with the kid's father getting out of prison, demons, and a family of hot Vikings serving an Archangel...and this book ends up being a good read.