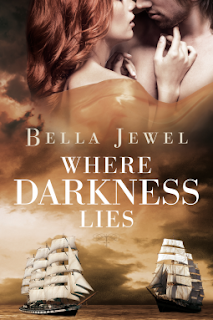 & Details provided by Net Galley in exchange for honest review.*

Anger and pain brought them together, but their passion might just set them free.

Dimitri wants only one thing: revenge. His stepfather, Hendrix, has caused him nothing but pain and heartache. At last Dimitri can take something—someone—important to Hendrix and make him pay: Jess.

Jess is feisty and strong headed. Her past haunts her and connects her to the dangerously dark Dimitri in an unexpected way. Dimitri keeps his secrets locked deep inside, and Jess is drawn to this broken man like no one before.

With little to cling to besides their haunting pasts, both could have been doomed to lives spent raging against the darkness that holds them prisoner. Instead, it seems that as their pain draws them closer together, it is their desire and combustible passion that will set them free.

Where Darkness Lies is a sizzling romance and the second book in the popular Criminals of the Ocean series.

My Thoughts:
I have a secret love for Pirates (especially the ones that seem to be really bad). So, even though I haven't read the other books in this series, I was looking forward to opening it up and getting to meet this pirate.
Kidnapping, revenge, vengeance, and more.
However, Dimitri, to me, wasn't fulfilling my pirate fantasy, at least not completely. There was just something....too much fighter maybe?
There was an unexpected plot twist which pulled me in a bit.
However, it was good. Not great, but not bad. Good.