Book Review: Dosha-Flight of the Russian Gypsies by Sonia Meyer 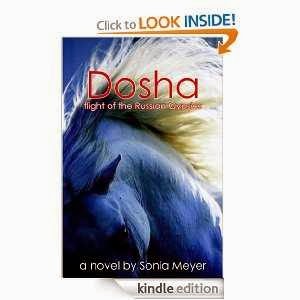 Publication Date: August 21, 2011
In 1956 Khrushchev s Thaw triggers the Hungarian Revolution and upheaval in the Soviet Empire. During Khrushchev s first state visit to Helsinki, Dosha, star rider of the Soviet Dressage Team and her horse defect with the help of local Gypsies. The novel follows the life of Dosha, a Gypsy in disguise. It offers unique insight into the tribal life of nomadic Gypsies, who under Stalin joined partisans fighting Nazi invaders, only to face entrapment during Khrushchev s Thaw. By then Dosha and her talented circus horse have been drafted into the dressage team in Leningrad. Navigating political intrigue, narrowly escaping discovery by the KGB, she enters a love forbidden to Gypsy women. One goal remains uppermost in her mind leading her tribe and her horse to freedom in the West.

Review: Set during the Soviet era, Dosha and her beautiful stallion are drafted into and become the star of the Soviet Dressage Team -- but can she keep her Gypsy heritage hidden from everyone so she can escape to the west?

There's plenty of drama in the form or romance and action. The realism stays true and is brilliantly told. This book was well researched and it shows.
I'm not going to give away any more of this book-- but be sure to add it to your shelf this year. It's a must read.