#BookReview The Crown of Stones: Magic-Scars by C. L. Schneider 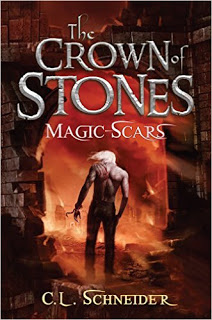 The story of Ian Troy continues in Magic-Scars, the second installment in C. L. Schneider’s riveting epic fantasy trilogy, The Crown of Stones.

Captured by his old enemy, King Draken of Langor, Shinree magic user Ian Troy was sentenced to prison. Tortured and drugged, robbed of his will, his memories, and his magic, Ian was made to do unspeakable things. Rescued, as his body slowly rids itself of the drug, Ian realizes he has returned to an unfamiliar world gripped with fear. In the wake of his fall, those he cared for were left to their own grim fates. Draken has seized control of the realms and named himself High King. His brutal rein has sparked a desperate rebellion that Ian now finds himself a part of. His one task: recover and repair the Crown of Stones, in hopes it will tip the balance in the revolution that is brewing. In pursuit of the reason behind the artifact’s strange loss of magic, Ian is driven to release an explosion of retribution and power that leaves him irrevocably scarred.

Struggling to reconcile the man he has become with the man he once was, Ian strives to understand the growing number of magic-scars adorning his body. He searches for the truth behind his link to the Crown of Stones and uncovers shocking secrets buried for generations beneath the sand. To become the weapon the resistance needs, he must assume responsibility for his magical inheritance. But can he curb the destructive appetite that comes with it?

What I liked: Wow! I mean, really – what did I not like? Action packed, fast paced, great characters.

What I didn’t like: Definitely does not apply to this book. Well done.

What bugged me: I haven’t read book 1.

Review: Magic, battles, amazing dialogues…fast paced, so make sure you really have time to read this book at once (it’s on the longer side) because you will not want to put it down.
This book is a continuation of book 1, so while I enjoyed it, I would have loved to have read Ian’s battles and how he got where he was in book 1 (my own fault – definitely NOT he authors).
There were characters I hated and characters I loved – even ones that bugged me a bit, but you could tell you were supposed to have that reaction. I love when an author can pull you in and make you feel as though you are actually in the world they are writing about.