Book Review: A Bloody Field by Shrewsbury by Edith Pargeter 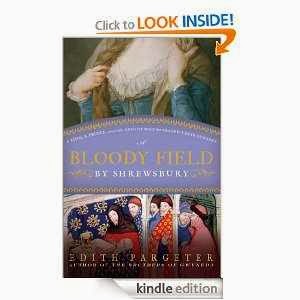 Publication Date: November 1, 2010
A masterful tale of 14th century England, as fans of Edith Pargeter’s The Brothers of Gwynedd have come to expect. Henry Bolingbroke, banished and deprived of his inheritance by Richard II, returns and deposes the king to become Henry IV. He is aided by powerful lords, especially by his friend, Harry “Hotspur” Percy. But his triumph quickly fades in the face of evergrowing crises. Not only is Wales rebelling, but the question of how Richard II really died lingers, causing dangerous trouble. The king also has powerful enemies poised to pounce, as he and his kingdom are drawn inexorably to a bloody collision some two miles from Shrewsbury.

Review: Let me say there is no typo in the title.
The first thing that caught my eye with this book was on the top of the front cover. It says: "A King, a Prince and the Knight who betrayed their dynasty." Now, tell me that doesn't get your attention. I had to put aside other books, finish the one I was reading and dive right into this one.

The teasing didn't end there. I flipped to the very last page as soon as I was ready to read it. The top of this page says " A burning desire for one country, one love and one legacy that will last forever." Then, there was no question, I had to move this to the top of the TBR pile.

If you enjoy historical fiction, you will absolutely love this. This is also pretty accurate. So, it's obvious there was some very well done research {which I love, I still complain about the movie "Troy" being historically inaccurate}.

With the way this is written, I'm so afraid of giving away what goes on in this book. What I am going to say is ...


Follow the tale of the three Henry's. You'll be glad that you did.