#BookReview - Before We Fall by Courtney Cole 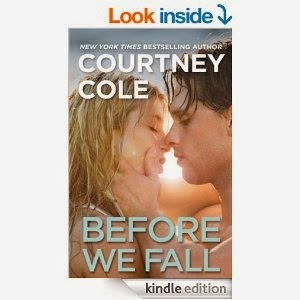 Sometimes before we fall . . . we fly.One dark moment was all it took to turn twenty-four-year-old Dominic Kinkaide's world black. On the night of his high school graduation, a single incident changed him forever, and he became a hardened man-famous in the eyes of the world, but tortured inside. Now all he cares about is losing himself in the roles that he plays.

At twenty-three years old, Jacey Vincent doesn't realize how much her father's indifference has affected her. She is proof that sometimes it isn't one specific moment that wrecks a person, but an absence of moments. She tries to find acceptance in the arms of men to fill the void-a plan that has worked just fine for her, until she meets Dominic.

When jaded Dominic and strong-willed Jacey are thrown together, the combination of his secrets and her issues turns their attraction into the perfect storm. It could change their lives for good-if it doesn't tear them both apart . . .

: First - Dominic's character is unbelievable  Oh wow. So much emotion in this book and so well written. The characters come to life (grab tissue) and the story is emotionally moving. Jacey and Dominic just fit. They both have their own past struggles to deal with.
This is a page turned from the moment you start getting to know the characters. This was the first Courtney Cole book I've read, but it won't be the last.
A must read.