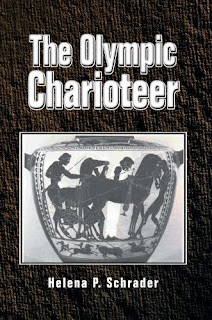 Summary from GoodReads: Antyllus of Tegea had everything—wealth, power and respect—until his son was killed defending Tegea against Sparta. Now Tegea is on the rise, but Antyllus can find pleasure in nothing—not even his magnificent racehorses. While all Tegea believes Antyllus' chariot could bring Tegea an unprecedented Olympic victory, Antyllus knows that he lacks a driver capable of coaxing the best out of his team. More disturbing, Antyllus worries that Tegea's victory over Sparta is being used by certain radicals to undermine the democratic constitution. The Strategos that won the decisive victory is a demagogue—and he wants to extend the franchise to landless men. Out of spontaneous pity, Antyllus purchases an abused quarry slave. The slave not only carries the seemingly prophetic name of “Philip”, (Lover of Horses) but has an uncanny affinity for horses as well. While Tegea slips into tyranny, Antyllus turns his back on politics and focuses his hopes and dreams on an Olympic Victory.

This is the story of a slave and a charioteer in Archaic Greece. Based on Ancient sources but using predominantly fictional characters, The Olympic Charioteer describes the events that led to the establishment of the first “non-aggression pact” in recorded history.
My Review: This is a great read for the history buff. This is well researched. Two wonderfully laid out books with well researched history in one week. I'm in heaven.
This brings to light the Sparta and Tegea war in 6th century BC. Lysandradis, {main character} is sold as a slave after Sparta is defeated by Tegea. The characters come alive in this book. There are adventures and so much more. It's almost like being there. There's so much within the book, it's difficult to not want to give away most of it. There are three distinct parts to this book, all will keep you wanting more.
Any lover of history will enjoy this...especially those who enjoy Greek history. This is a real page turner as you try to see if he will return to his beloved Sparta or remain in a land that enslaved him. Another wonderfully written book that will get many re-reads.
RATING: ♥♥♥♥♥
Pages: 398
Softcover
Review copy of this book provided by the author/publisher in exchange for a fair and honest review. In no way did the provision of the book affect the outcome of my review.
Share This