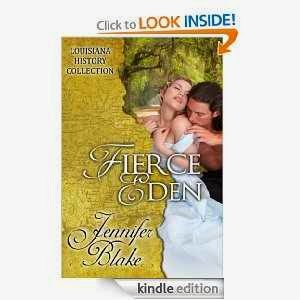 Reynaud, of both French and Natchez Indian blood, endures a deadly slur from the lovely widow, Elise Laffont. Because of it, he demands she become his bedmate in return for saving her and her friends during a dangerous uprising. How was he to know she dreaded a man's possession?

Elise expects the same brutal treatment from the half-breed brother of the ruler of the Natchez that she received from her dead husband. Instead, she is presented with a dubious bargain: Reynaud will not touch her--as long as she explores his magnificent body each night instead.

Their sensual pact turns to fiery desire, forging a bond as tender as it is strong. But the war between French and Natchez escalates, forcing desperate choices between honor and duty, loyalty and love.

Review: Another book I read in one night. I loved the patience and trust showed in this book, while fighting inner, not so patient urges. Reynaud is the perfect *hero* -- flawed, yet something makes you want to be Elise. So many times books have the ultimate form of perfection in the men they use as heroes -- not Fierce Eden and it made the book all the more enjoyable.

There are some interesting twists and happenings in the book and the ending is not what I would have expected it to be. Definitely a have to have for your probably over flowing book shelf.

(I've come across at least 3 covers for this, none of which are the one I have on my print version, so just a reminder to readers: Always check the summary, just because it has a new cover, it could be something you've already read.)