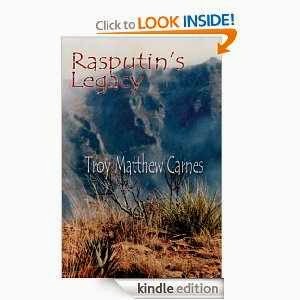 Publication Date: June 3, 2010
What if the two most ruthless mass murderers in history wanted you dead? Giorgi Lazarov is only a young boy, but he can predict the future. Until recently, only one person on earth knew that Giorgi's remarkable gift was passed down from his famous grandfather Grigori Rasputin. But now the two most dangerous men in the world know of his special power. Adolf Hitler learns of him through SS Reichsführer Heinrich Himmler's most gifted witch, and Joseph Stalin finds out when an insane prostitute languishing in an asylum claims to have borne Rasputin's child. She is in fact Giorgi's grandmother. Now, as the Nazi war machine invades the Soviet Union, launching the bloodiest conflict in human history, both Hitler and Stalin want him desperately. They send their most capable assassins to find the boy and either claim his power for their cause or make certain that he does not live to be used against them. When the Germans capture his village, Giorgi is separated from his parents, and he finds himself in a world of madness and utter evil where it seems there are only killers and corpses. The people of the Ukraine can see no hope for salvation, but Giorgi can see everything... More information on Troy Matthew Carnes inside and on his author site: www.troymatthewcarnes.com

Review: Set in Russia during World War II, Giorgi Lazarov is a boy who can predict the future. Hitler and Stalin have found out. Giorgi has the power to change the entire world. Can he do it?

The characters are well developed and this is a great read even for someone who doesn't always enjoy history. You can "see" the characters. You get an adventure filled book with a great ending. A definite great read for during a busy week.