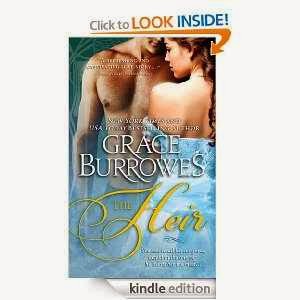 Publication Date: December 1, 2010
Now a New York Times Bestseller!"A dazzling debut brimming with passion, romance, and wit."
-Sophia Nash, RITA ward-winning author of Secrets of a Scandalous Bride
An earl who can't be bribed...
Gayle Windham, earl of Westhaven, is the first legitimate son and heir to the duke of Moreland. To escape his father's inexorable pressure to marry, he decides to spend the summer at his townhouse in London, where he finds himself intrigued by the secretive ways of his beautiful housekeeper...
A lady who can't be protected...
Anna Seaton is a beautiful, talented, educated woman, which is why it is so puzzling to Gayle Windham that she works as his housekeeper.
As the two draw closer and begin to lose their hearts to each other, Anna's secrets threaten to bring the earl's orderly life crashing down-and he doesn't know how he's going to protect her from the fallout...

Review: I rarely ever cry over books {unless it's about dogs}, but I'll admit to a few tears over this one when stubborn Westhaven and Anna are both too stubborn to not allow the other to walk away. I will also admit to staying up until 5am to read this book. I didn't want to put it down, although I had to as good sense called for at least getting a couple of hours of sleep before the kids were up and about.

Well-developed characters and a great story line make this book a great read. However, there were two things that kind of bothered me--the two things are what kept this from being a 5 heart book, in my opinion.
First, there is page after page of great "pre-sex" scenes. {{Pre-sex=everything but the actual act}} But then when they finally fully have sex, I felt robbed. The scene seemed to short and lacking in detail compared to the previous hot scenes. I'll admit, I was wanting a scorcher to read and this one delivered until the actual part.
The other part that bothered me, while most of the book was descriptive and you felt like you were there, the ending seemed so rushed. I understand the book was already sitting at almost 450 pages, but I wanted more than what, to me, felt like a quick wrap up.
Still a great read...and it took up my almost an entire night for me and a few hours the next day--very hard to put down.