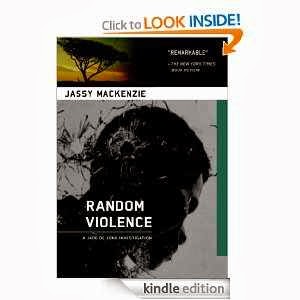 Publication Date: April 1, 2010
In Johannesburg prosperous whites live in gated communities; when they exit their cars to open the gates, car-jackings are common. But seldom is the victim killed, much less shot twice, like Annette Botha. Piet Botha, the husband of the wealthy woman, is the primary suspect in his wife's murder.

P.I. Jade de Jong fled South Africa ten years ago after her father was killed. Now back in town, she offers to help her father's former assistant, Superintendent David Patel, with his investigation of this case. Under apartheid, Patel, of Indian descent, could never have attained his present position. But he is feeling pressure from his "old line" boss with respect to this investigation and fears lingering prejudice is at work.

As Jade probes into this and other recent car-jacking cases, a pattern begins to emerge, a pattern that goes back to her father's murder and that involves a vast and intricate series of crimes for profit.

Review: This book has an interesting twist in that you don't get the entire story from the hero of the book. There are several chapters in the book that are from the criminal's point of view. This would be a very interesting take if it were done differently. To me, it took away from the plot, by letting you too into the killer. If it was written from the killer's perspective and you weren't allowed to almost figure him out....it would have been incredible.

This book isn't huge on intricate plots and, at points, simply relies on the stupidity of characters making it a little unrealistic. That said, it wasn't a bad read and is still worthy of a pick up for a good Thursday night read before a weekend out.