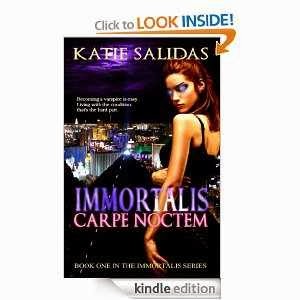 Publication Date: March 2, 2010
Becoming a vampire is easy. Living with the condition...that's the hard part.

Newbie vampire Alyssa never asked for this life, but now it's all she has. Rescued from death by Lysander, the aloof and sexy leader of the Peregrinus vampire clan, she's barely cut her teeth before she becomes a target.

Kallisto, an ancient and vindictive vampire queen – and Lysander's old mate - wants nothing less than final death for her former lover and his new toy. She's not above letting the Acta Sanctorum, and its greatest vampire hunter, Santino, know exactly where the clan can be found.

With no time to mourn her old life, Alyssa's survival depends on her new family. She will have to stand alongside Lysander and fight against two enemies who will stop at nothing to destroy them.

Review: This is book 1 in Katie's new series. Lysander saves Alyssa by turning her into Vampire after she'd been attacked.

These Vampires are real. They don't sparkle, they don’t have daylight rings, and they don’t have fake blood in a bottle. They drink a lot of human blood and they kill their prey. I love it.  This book was a wonderful set up for her next book in the series. We get to see how Vampires are through the eyes of Katie Salidas. I was thankful that they were believable and not light and fluffy.
Salidas does a wonderful job of building her characters in this book. I read this on a Friday night and couldn't wait to sink my teeth into book 2 the following night. A great book that you won't want to put down.