#BookReview - ASH: Return of the Beast by Gary Val Tenuta 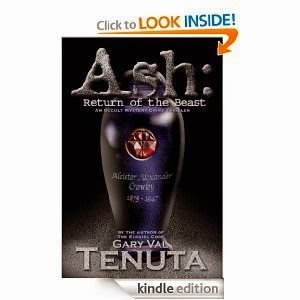 Blurb:   Ash: Return of the Beast is an occult crime thriller, a work of fiction based on a little known factoid about the death of Aleister Crowley (1875-1947), the notorious occultist the British press once called "The Wickedest Man In The World". Crowley’s body was cremated but the whereabouts of his funerary ashes has remained a mystery… until now.

This diabolical tale carries the reader through a series of the most curious (and sometimes unsettling) events spanning the years from 1947(and the death of Aleister Crowley) to the 1990s and the coming-of-age (and eventual stardom) of a "death-metal" rocker named Rodney Duckworth.

The time-line shifts to the present day where Brian Kane, a gruff and gritty, street-worn Seattle Police Detective, reluctantly teams up with the mysterious Rowena Ravenwood, an attractive FEMALE

FBI agent. Their task is to figure out why good, healthy, God-fearing preachers in their fair city are suddenly dropping dead.

What is the meaning of the strange symbols branded onto the bodies of these hapless victims? Are they all part of some bizarre cult? No eyewitnesses. No fingerprints. Is it really murder? Where’s the evidence? And what is the disturbing secret that Detective Kane is holding so close to his chest?

The investigation catapults Kane and Ravenwood headlong into life-threatening situations as they wind their way through the strange, dark labyrinth of the world of the occult and find themselves battling the powerful forces of ritual magick.


My Review: What a wonderful scary read. You can tell extensive research was done for this book. All I can really stress are two points. 1. I am going to be searching and reading any other books he may have. 2. I hope he writes fast because this is one author I won't tire of.

One of the things I really loved about this book is that I really couldn't predict the exact ending. So often with thrillers and mysteries I have everything long figured out and the book is still going and going. Not this time. There's a thrill and a chill with each turn of the page. And, you go through bouts of "no, I don't want to know. I won't turn the page." .... to "Oh my gosh, I have to turn the page."

I spent the day reading this book and only took the breaks I had to in between. A must have for every reader's collection.
Rating: 5 of 5